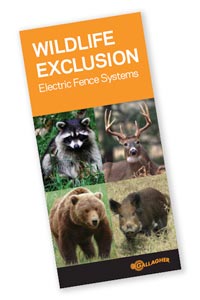 The challenges of Bear Fencing exclusion.

“Bears are smart animals and they will find a way to get around most preventative measures.”

Bears of all kinds are a sometime dangerous nuisance around Yellowstone and Grand Teton National Parks and the national forests of northwestern Wyoming. It’s a wilderness area bordered by Montana and Idaho that’s perfect habitat for a large and growing population of bears.

Bears are born scavengers that can get aggressive when they’re hungry. Easily accessible campsites, apiaries and dumpsters are nothing more than convenient dining spots for these creatures. When they decide to munch on whatever’s handy, they can do serious economic damage and threaten people as well as livestock.

Mark Bruscino is a bear specialist with the Wyoming Game and Fish Department. Bears are his constant problem. “They’re smart animals and they will find a way to get around most preventative measures. They can knock down barriers and tunnel under most fences.”

“We have to keep them out of grain sheds, small garbage dumps and dumpsters. Most of the things we tried in the early 1990’s didn’t work,” he said.

Gallagher North America, helped design an electric fence to solve the problem. “I’m sold on it,” said Bruscino as he talked about the fence. “It’s top notch stuff.”

The fence is “100% effective” when it’s maintained properly, says Bruscino.

The Game and Fish Department uses permanent and temporary Gallagher electric fences now. The permanent electric fences are installed where bears are a constant problem – around camp grounds, for instance. Temporary electric fences can be quickly erected around sites like grain bins until the bear can be captured and transported to a remote location.

“We use a five-wire electric fence with high tensile wire. Because it can be very dry, we use alternating hot and ground wires to make sure we’ve got full conductivity,” said Bruscino as he described the permanent fence set up. Wooden corner posts anchor the fence and he uses fiberglass posts to support the wire. The lower three wires are spaced six inches apart and the top two wires have 10 inches between them, making for a bear proof barrier.

Bruscino estimates bears have tested the fence hundreds of times without successfully breaking through. “Usually, they just spin around and take off,” he said. “I saw evidence that a bear swatted at the wire once but all it did was stretch it out a bit.”

To prevent “tunneling” bears from going underground, Bruscino uses a woven wire ground in some place. Stretching about three feet out from the fence line, it’s additional discouragement to marauding beasts.

Bee keepers in the region sleep better at night and goat/sheep herds graze unharmed. More importantly, campers can sleep safely at night, too, with nothing between them and the night air but a few square yards of canvas.

According to Randy Bailey, Territory Manager for Gallagher North America, “A properly constructed permanent electric fence provides both a physical and psychological barrier that keeps domestic and wild animals where they should be with safety and security. Keep in mind that the fence must be well designed in accordance with the species to be controlled, and constructed to withstand the harsh weather conditions that hit places like the Rockies in the dead of winter.”​ 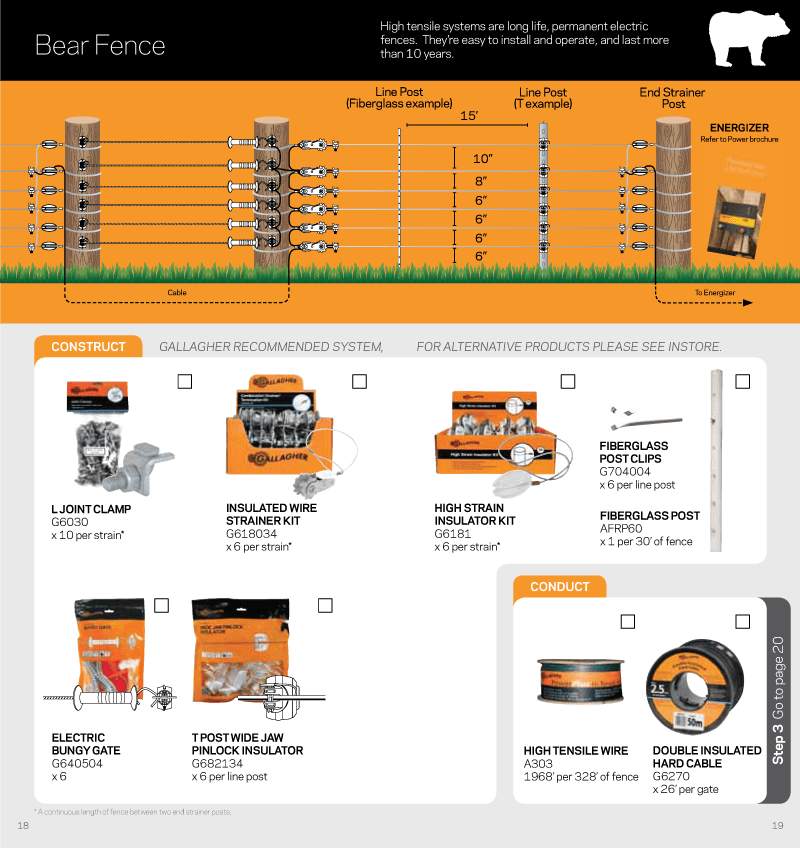 For areas of short term or seasonal protection a temporary portable electric fencing system may be a viable option. Gallagher SmartFence is the most advanced multi wire portable electric fence system on the market. This 100m (330ft) 4 strand poly wire multi reel system, complete with posts and corner anchors, all packaged in one unit making the SmartFence an ideal solution. Adjustable in length portable bear fence system that can easily be made a positive/negative system if desired. Matching the system to an appropriate sized solar energizer or powered energizer is very important.

Ground Rod – Improper grounding is the most common reason for electric fence malfunctions!
Proper grounding will determine how effective the electric fence system will be. It can be a long steel rod pounded into the ground or a plate dug three to four inches into the ground. If the ground is too dry or the ground rod inadequate, the electricity may not find its way back to the energizer resulting in little or no shock to the animal. Grounding one of the wires with a single reel connector is a recommended addition. As a minimum, install 90 cm (3 foot) of ground rod for every joule of output from the energizer. Either a ground rod, a ground plate or a combination of both may be used.

PRECAUTION:
Please be aware that a temporary portable electric fencing system can be successful at excluding bears but it is by no means a more full proof system like the suggested permanent fence solution above.